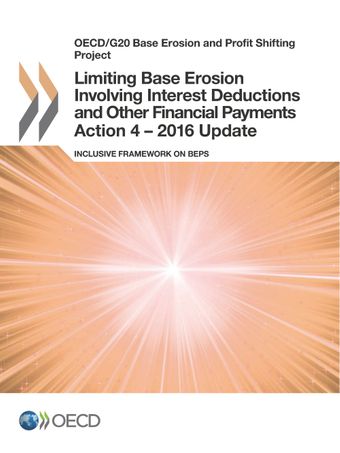 The mobility and fungibility of money makes it possible for multinational groups to achieve favourable tax results by adjusting the amount of debt in a group entity. The 2015 Report established a common approach which directly links an entity’s net interest deductions to its level of economic activity, based on taxable earnings before interest income and expense, depreciation and amortisation (EBITDA). This approach includes three elements: a fixed ratio rule based on a benchmark net interest/EBITDA ratio; a group ratio rule which allows an entity to deduct more interest expense based on the position of its worldwide group; and targeted rules to address specific risks. Further work on two aspects of the common approach was completed in 2016. The first addressed key elements of the design and operation of the group ratio rule, focusing on the calculation of net third party interest expense, the calculation of group-EBITDA and approaches to address the impact of entities with negative EBITDA. The second identifies features of the banking and insurance sectors which can constrain the ability of groups to engage in BEPS involving interest, together with limits on these constraints, and approaches to deal with risks posed by entities in these sectors where they remain.