Measuring the impact of foreign demand on domestic labour markets

Growing economic integration worldwide and the spread of global value chains (GVCs) increases the sensitivity of employment in one country or region to changes in demand in other countries or regions. However, traditional statistics do not reveal the full nature of global interdependencies - notably how consumption in one country may drive production and, therefore, sustain employment in economies further up the value chain. OECD’s Inter-Country Input-Output (ICIO) Database, developed primarily to produce indicators of Trade in Value Added (TiVA), also allows indicators to be developed that can provide insights into the origins of demand driving a country’s employment. Estimates of employment sustained by foreign final demand (or by exporting activities) can reveal the extent to which a country’s workforce depends on its integration into the global economy.

The Trade in employment (TiM) Database presents indicators of employment by industry, consistent with output and value added in the TiVA database, for all OECD, European Union and G20 countries. All 45 TiVA industries are covered for the time-period 1995-2018.

The results presented here are based on the 2021 edition of the ICIO Database.

In 2018, for example, between 30% and 50% of business sector employment in most European countries was sustained by consumers in foreign markets (though predominantly within Europe – a consequence of regional economic integration). For some smaller European countries, this share reached over 50%. In Japan and the United States, shares are lower, reflecting their relatively large size and lower dependency on exports / imports. In spite of this, estimates suggest that in 2018 the number of jobs sustained by foreign demand reached over 12 million in the United States and almost 9 million in Japan.

Employment in business sector sustained by foreign final demand, by region of demand, 2018

As a percentage of total business sector employment 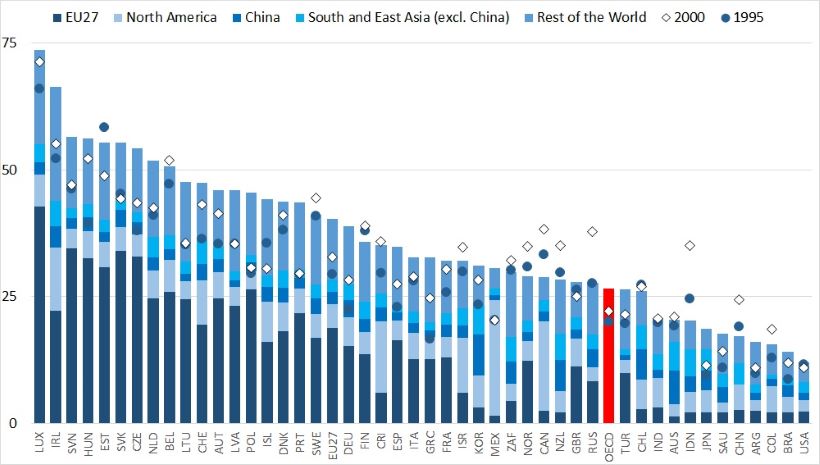 Note: OECD and EU27 averages include intra-regional flows; these figures should be considered as weighted averages of their member countries.

Other editions of TiM

Any suggestions or queries can be sent to stan.contact@oecd.org mentioning Trade in Employment (or TiM) in the title of your message.