March 2018 - Transforming traditional gender roles and promoting gender equality requires addressing discriminatory social norms. The need to change boys’ and men’s attitudes towards caregiving and other unpaid work and ensuring that men are not stigmatised when they take on care responsibilities is a keystone of gender equality (OECD, 2017). Social norms shape acceptable roles, opportunities and behaviours for women and men in society and the household. Deeply entrenched gender stereotypes confine men to breadwinning and view unpaid care work as a female prerogative. Across the world (Figure 1), one in three men would prefer their wife to stay at home and take care of the family and unpaid housework rather than be in paid work (ILO and Gallup, 2017). Similarly, social norms prevent men from assuming equal caring responsibilities at home. According to a recently published Social Institutions and Gender Index (SIGI) country study in Burkina Faso (Figure 2), 92% of the population think that a man’s role is to financially support his family, and around 33% believe that a man responsible for care and domestic duties instead of pursuing paid work is not worthy of esteem (OECD, 2018). 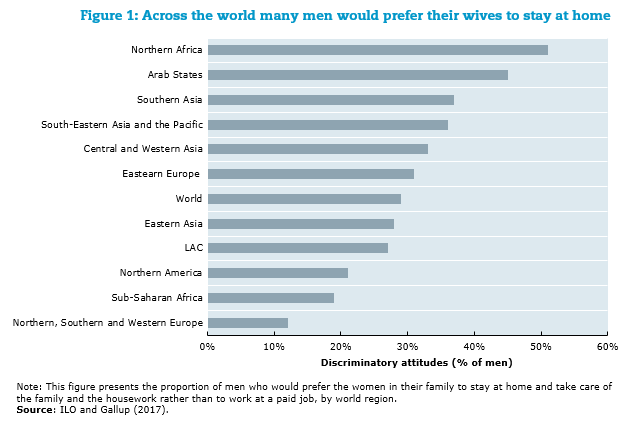 On account of gendered social norms, gender patterns in time devoted to unpaid care work are perpetuated across generations. Women and girls spend an important part of their day meeting the expectations of their domestic and reproductive roles. Globally, women bear the disproportionate responsibility for unpaid care work: over 75% of the world’s total unpaid care work is done by women. Women spend on average between three and six hours on unpaid care activities, while men dedicate between half an hour and two hours (OECD, 2014). Moreover, globally, three-quarters of the time women are performing domestic and care activities in collaboration with their daughters, transmitting gender roles to the younger generation. The experience in Burkina Faso confirms that traditional gender roles are perpetuated across generations and are deeply embedded in cultural norms: 90% of people in the country think that girls should perform domestic activities as part of their upbringing. This proportion is even higher for some activities traditionally perceived as ‘feminine’: 100% of the Burkinabe population believe that girls should participate in cooking activities while less than one third of the population believe boys should engage in cooking. 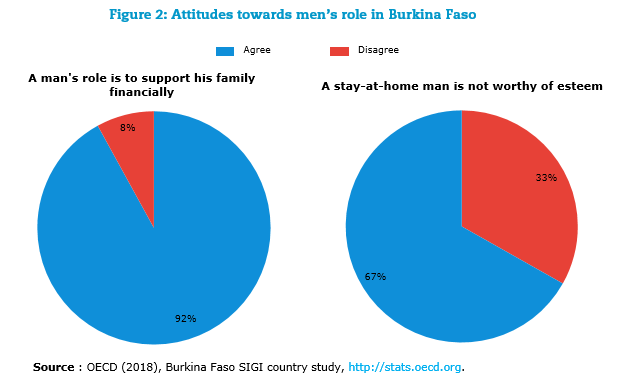