10/04/2019 - Governments need to do more to support middle-class households who are struggling to maintain their economic weight and lifestyles as their stagnating incomes fail to keep up with the rising costs of housing and education, according to a new OECD report.

Under Pressure: The Squeezed Middle Class says that the middle class has shrunk in most OECD countries as it has become more difficult for younger generations to make it to the middle class, defined as earning between 75% and 200% of the median national income. While almost 70% of baby boomers were part of middle-income households in their twenties, only 60% of millennials are today. 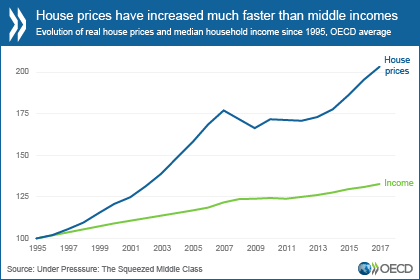 The economic influence of the middle class has also dropped sharply. Across the OECD area, except for a few countries, middle incomes are barely higher today than they were ten years ago, increasing by just 0.3% per year, a third less than the average income of the richest 10%.

Gabriela Ramos, OECD Chief of Staff and Sherpa overseeing the Organisation’s work on Inclusive Growth, presented in more details the main findings of the report, saying “our analysis delivers a bleak picture and a call for action. The middle class is at the core of a cohesive, thriving society. We need to address their concerns regarding living costs, fairness and uncertainty.”

The cost of a middle class lifestyle has increased faster than inflation. Housing, for example, makes up the largest single spending item for middle-income households, at around one third of disposable income, up from a quarter in the 1990s. House prices have been growing three times faster than household median income over the last two decades.

More than one in five middle-income households spend more than they earn and over-indebtedness is higher for them than for both low-income and high-income households. In addition, labour market prospects have become increasingly uncertain: one in six middle-income workers are in jobs that are at high risk of automation, compared to one in five low-income and one in ten high-income workers.

To help the middle class, a comprehensive action plan is needed, according to the OECD. Governments should improve access to high-quality public services and ensure better social protection coverage. To tackle cost of living issues, policies should encourage the supply of affordable housing. Targeted grants, financial support for loans and tax relief for home buyers would help lower middle-income households. In countries with acute levels of housing-related debt, mortgage relief would help overburdened households get back on track.

Finally, to foster fairness of the socio-economic system, policies need to consider shifting the tax burden from labour income to income from capital and capital gains, property and inheritance, as well as making income taxes more progressive and fair.

Under Pressure: The Squeezed Middle Class is the latest in a series of OECD reports that have documented over the past decade how inequalities have increased in our societies, making it harder for many citizens to make ends meet.