Unemployment rate in the OECD area drops further to 5.4% in December 2021

8 Feb 2022 - The monthly unemployment rate in the OECD area fell for the eighth consecutive month to 5.4% in December 2021, down from 5.5% in November, bringing it to just 0.1 percentage point above the pre-pandemic rate recorded in February 2020 (see Figure 1). The number of unemployed workers across the OECD area also continued to fall (by 0.7 million) reaching 36.1 million, still 0.5 million above the pre-pandemic level. In December (or the latest period available), the unemployment rate was below the pre-pandemic level in Australia, Chile, France, Iceland, Italy, Lithuania, Luxembourg, the Netherlands, New Zealand, Portugal, Spain and Turkey1 (see Figure 3).

Breaks between December 2020 and January 2021 for several EU Member States resulting from changes in the EU Labour Force Survey. This break can affect, to some extent, aggregates for the euro area and OECD Total. 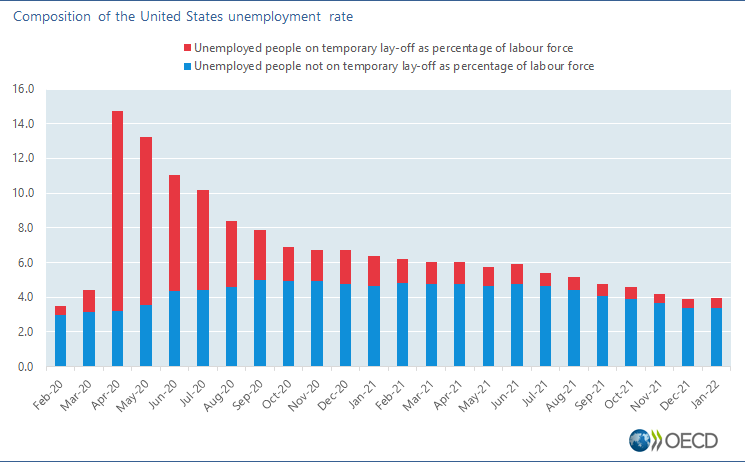 ‌‌Source: OECD calculations based on US Current Population Survey

For Canada and the United States, the statistical treatment of people on temporary layoff is different from other countries, where these people are typically recorded as employed. See the note on the divergence in employment and unemployment statistics during the Covid-19 crisis in the end of this news release

1. European countries which experienced a methodological break between December 2020 and January 2021 in their unemployment series were excluded from this list (see methodological changes in the EU Labour Force Survey).