18/09/2019 - Migration flows to OECD countries rose slightly in 2018, with around 5.3 million new, permanent migrants, a 2% increase over 2017. Family and labour migration increased, while the number of asylum applications fell sharply, according to a new OECD report.

The OECD International Migration Outlook 2019 says that asylum applications decreased to 1.09 million in 2018, 35% fewer than the record high of 1.65 million requests registered in both 2015 and 2016. Most asylum seekers came from Afghanistan, followed by Syria, Iraq and Venezuela. Because of the drop in asylum applications, the number of registered refugees also declined, falling by 28%.

Migrants’ employment prospects continued to improve in 2018, building on the positive trends observed during the last five years. On average across OECD countries, more than 68% of migrants are employed and the unemployment rate has fallen below 9%. However, young immigrants and low-educated immigrants still struggle in the labour market.

Temporary labour migration increased significantly in 2017, reaching 4.9 million, compared to 4.4 million in 2016. This is the highest level since the OECD started reporting these numbers more than a decade ago. Poland is the top temporary labour migration destination, surpassing the United States. In the European Union (EU) and the European Free Trade Association (EFTA) area, workers “posted” by their employers to work in other EU/EFTA member states represented the largest single group for temporary workers, with almost 2.7 million postings.

“The significant increase in temporary labour migration is a sign of the dynamism in OECD labour markets but also of their integration,” said OECD Secretary-General Angel Gurría, launching the report in Paris. “Temporary migrants bring skills and competences that are needed by employers.” 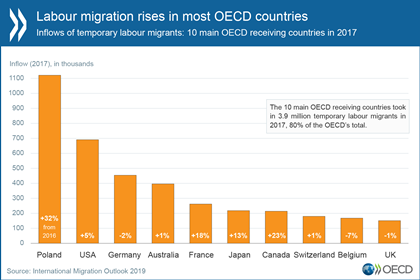 The Outlook also finds that OECD countries continue to adjust their labour migration programmes to improve selection and favour needed skills. A number of countries have also reformed their entry processes for migrants who are investors or have created new programmes for migrants developing start-ups. Some countries have introduced restrictions to family reunification procedures or streamlined their asylum procedures.

Family migration, where people migrate with, or to join, family members, increased by 9% and labour migration by 6%. 2018 also saw a sharp rise in the number of international students enrolled in tertiary education across the OECD, increasing by 7%, to over 3.5 million. The United States, the leading destination, however saw a decrease in student flows and a shrinking OECD market share.

Family migrants comprise 40% of total inflows, more than any other category. This broad category includes natives of OECD countries bringing spouses from abroad, but also immigrants arriving with accompanying family, or sponsoring their reunification. More than half of immigrants who have family did not bring their family with them at first.


Working with over 100 countries, the OECD is a global policy forum that promotes policies to improve the economic and social well-being of people around the world.