Over the past decade, Europe’s largest capitals boomed, recording faster population and productivity growth than their respective countries overall. On average, between 2010 and 2018, the latest available year in OECD’s Regional Database, the populations of Berlin, London, Madrid and Paris grew 6%, while those of Germany, the UK, Spain and France rose 3%. GDP per capita jumped more than 12% in these cities, almost 3 percentage points faster than national growth. 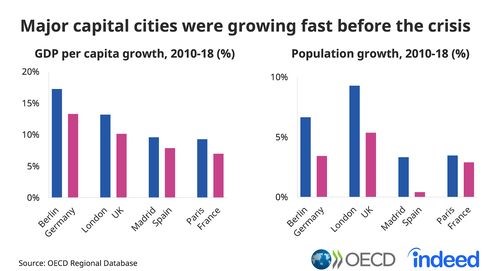 The big-city growth advantage is due in part to the concentration in these capitals of burgeoning sectors with high-paid jobs, like tech. For instance, London, Madrid and Paris account for 30% or more of all tech developers in their respective countries, data from social media profiles suggest, even though the three cities represent only 15%, 14% and 18% of their national populations. This concentration is less striking in Germany, but still, 16% of German tech developer jobs are in Berlin, which is home to only 4% of the national population. 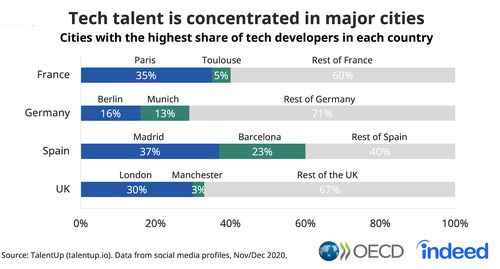 Indeed job posting data show that labour markets in Europe’s biggest capitals contracted dramatically when the pandemic hit. At their low point, postings were down 26% in Berlin, 57% in London, 48% in Madrid and 42% in Paris compared with the pre-pandemic baseline of 1 February 2020. During much of the past year, postings in these cities were off more than in the rest of their respective countries, creating a widening hiring gap. This is consistent with patterns in the US, where big-city postings were hit harder than the national average (Indeed, 2021[1]).

Despite a partial recovery recently, hiring in the major European capitals remains subdued. Through 29 January 2021, job postings were down 8% year on year in Berlin, 25% in Madrid, 26% in Paris and 41% in London. Further deterioration is possible since labour markets in these cities have been significantly buoyed by short-term national support schemes.

The start of 2021 has been kinder to some of the capitals than 2020 was. Relative to the rest of Spain, Madrid has staged a recovery, which probably reflects looser health restrictions there than in many other Spanish regions. London has also substantially narrowed the gap with the rest of the UK, but this may be because postings outside London have slumped again. Despite these positive signs, postings in Madrid and London are still far below pre-pandemic levels. 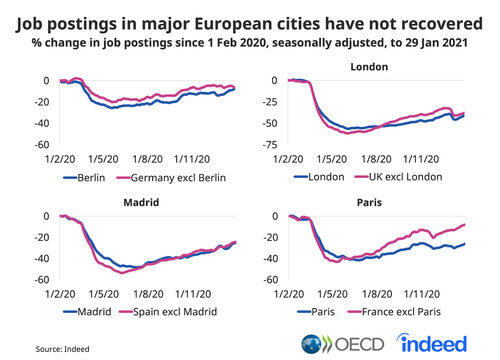 Several factors drive the labour market wedge between these cities and other places. Big cities have wide-ranging service sectors with extensive face-to-face interaction — everything from cafes to hair salons — and the pandemic has hit them hard (Indeed, 2020[2]). In particular, city-centre retail and hospitality businesses have been devastated by the collapse of tourism and the sharp drop in commuter traffic. In cities like London or Paris, which before the pandemic registered hundreds of thousands of daily commuters (with long commuting times) and many millions of international visitors, the service sector may be scarred for a long time (Eurofound, 2020[3]). Across the four cities, service occupations recorded the biggest job posting declines: down 25% in Berlin, 36% in Paris, 41% in Madrid and 61% in London. Many of these jobs are low paid, which means their disappearance risks widening urban inequality.

The rise of remote work: an asset or a new risk for city economies?

Remote work postings are much more frequent in Europe’s largest capitals than outside them. At the end of January 2021, the share of postings containing keywords related to remote work was 3 to 7 percentage points higher in these cities than elsewhere in their respective countries.

The different mix of jobs in the capitals is a key driver of this disparity. Simply put, these cities have a larger share of jobs that can potentially be performed remotely (Özgüzel, Veneri and Ahrend, 2020[5]). Postings in occupations suitable for working at home, like tech, finance, law and marketing, are most prevalent in big cities. In the capitals, postings in such occupations are closer to their pre-pandemic benchmarks than postings in occupations that generally cannot be performed at home, intensifying the labour market divide. 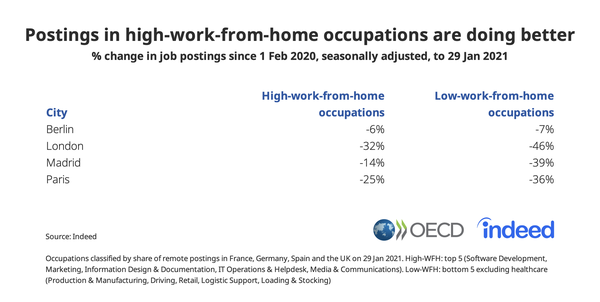 After the pandemic, this shift to remote work might last longer in major cities than elsewhere. When most European countries significantly eased health restrictions this past summer, sectors like hospitality and retail ramped up hiring and the national shares of remote job postings in France, Germany, Spain and the UK stopped growing. But that was not the case in the big cities. Despite the national trends, the shares of remote postings kept climbing In Berlin, London and Paris. Madrid did register a slowdown in remote postings share in the summer, but over the year those postings still grew more in the Spanish capital than in the rest of the country.

In the long term, the effects of the shift to remote work on city economies will depend on the ongoing working arrangements that take shape. Evidence from US housing markets shows a residential move trend from high-density to low-density areas within the same metropolitan region and little flow to other places (Bloom and Ramani, 2020[6]). This suggests that an increasing share of jobs will be hybrid, with a mix of in-office and at-home work. But the picture could turn out differently in Europe because cities such as London have already experienced population declines (ESCOE, 2021[7]). The pandemic is unlikely to eliminate the benefits and amenities that have drawn jobs and people to cities for decades. But the trends COVID-19 has initiated might weaken their appeal. A rethinking of the design and use of urban space may be in order (OECD, 2020[8]).

How can cities manage the adjustment to a post-pandemic labour market?

The pandemic’s labour market effects may be temporary for some sectors, but, for others, they may last. Job posting trends suggest a difficult period of adjustment for Europe’s major cities. At the very least, the rise of remote work may shift some economic activity away from city centres to surrounding areas, especially in services that involve face-to-face customer contact. These developments coincide with long-term trends that were already transforming work, such as digitalisation and automation (OECD, 2020[9]).

To manage this adjustment, policy makers in Europe’s large cities should support displaced workers and those at risk of redundancy with comprehensive skills development strategies, tailored to local challenges and aligned to the demands of the local economy (OECD, 2020, forthcoming[10]). In addition, digitalisation, automation, and the accelerated decline or shift towards online modes of some sectors such as retail means that career guidance should be closely linked to adult learning programmes. Measures should also strengthen local economies’ ability to ‘rewire’ by supporting inter-industry employee reallocation, which facilitates economic recovery after a crisis (Partridge and Tsvetkova, 2020[11]). Finally, given the concentration of digital jobs in major cities, local governments need to ensure that their workforce develops basic digital skills necessary in a rapidly changing world of work and support firms in managing the digital transformation (OECD, 2021[12]).

Going Local in a global crisis