At the Cannes Summit the G20 leaders adopted the Cannes Action Plan for Growth and Jobs. Leaders also launched the Agricultural Market Information System (AMIS) and endorsed an Action Plan on Food Price Volatility and Agriculture. A G20 Employment Task Force was set up. 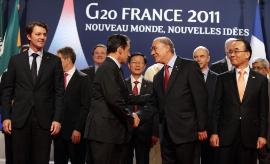 The approval of the Cannes Action Plan on Growth and Jobs by G20 Leaders was an important step to consolidate the role of the G20 as a coordinating and convergence mechanism for the world economy. The OECD played a pivotal role in the elaboration of this Action Plan, with specific emphasis on structural reform commitments. The Summit also delivered results in the areas of development, employment and anti-corruption; the OECD was prominently associated to these outcomes.

The OECD was particularly instrumental in moving forward the French Presidency’s priorities, among which food security, tax transparency and employment. The OECD contributed for instance to the inception of the Action Plan on Food Price Volatility and Agriculture and played a critical role in the successful French initiative to establish effective mechanisms aimed at reducing food price volatility (the Agriculture Market Information System and its associated Rapid Response Forum).

The results achieved in the G20 tax agenda were also notable. With ever increasing membership and the implementation of numerous peer-reviews, the OECD-hosted Global Forum showed how effective coordination and collective action, supported by G20 political momentum, can enhance global regulations and strengthen globalisation rules of the game. In addition, G20 countries signed – or committed to sign – the OECD/Council of Europe Multilateral Convention on Mutual Administrative Assistance in Tax Matters and its amending protocol (that provides for automatic exchange of information) and encouraged non-G20-jurisdictions to sign it.

Finally, the G20 set up the Task Force on Employment (TFE), which held its inaugural meeting in December 2011. The OECD worked closely with the French Presidency to define the TFE’s terms of reference, and subsequently with the Mexican Presidency to make it operational, for instance by providing inputs to the Task Force’s paper on “G20 Strategies for Youth Employment”.