04/11/2015 – Uganda today signed the Multilateral Convention on Mutual Administrative Assistance in Tax Matters. It is the 8th country of the African continent to sign the Convention and the 90th jurisdiction to join it. 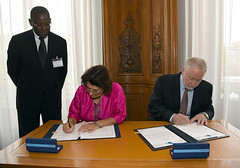 The Convention was developed jointly by the OECD and the Council of Europe in 1988 and amended in 2010 to respond to the call by the G20 to align it to the international standard on exchange of information and to open it to all countries, thus ensuring that developing countries could benefit from the new more transparent environment.

Since then, the Convention has become a truly global instrument. It is seen as the ideal instrument for swift implementation of the new Standard for Automatic Exchange of Financial Account Information in Tax Matters developed by the OECD and G20 countries as well as automatic exchange of country by country reports under the OECD/G20 Base Erosion and Profit Shifting (BEPS) Project. It is also a powerful tool for the fight against illicit financial flows.
By signing the Convention, Uganda takes a further step in fighting tax evasion and avoidance, building on its participation in the Global Forum on Transparency and Exchange of Information for Tax Purposes, which it joined in 2012.

Media queries should be directed to Pascal Saint-Amans (+33 1 45 24 91 08), Director of the OECD Centre for Tax Policy and Administration (CTPA) or the CTPA Communications Office.