Biodiversity and ecosystems continue to be lost, both with regard to life on land, and life below water. The OECD is working to promote biodiversity policies that are economically efficient, environmentally effective and distributionally equitable, including those policies that mainstream biodiversity in cross-sectoral practices such as agriculture, fishing and forestry.

More ambitious and effective policies are needed to ensure the conservation and sustainable use of terrestrial and marine biodiversity and ecosystem services. The OECD is continuing to pursue its strong commitment to provide guidance and good practice insights on strengthening and improving biodiversity policies; and provides a forum for the exchange of country experiences, tracking and collecting biodiversity-relevant data, and helps to improve the information base needed to design and implement more effective, efficient and equitable policies. This is crucial for meeting the objectives under the Convention on Biological Diversity, and the Sustainable Development Goals.

As a major user of land in many countries agriculture has had, and continues to have, a large impact on biodiversity and ecosystems. Agro-ecosystems, biodiversity and agriculture are closely interconnected; ecological functions and ecosystem services, such as soil structure and fertility maintenance, nutrient cycling, pollination, and the regulation of pests and diseases are vital for crop production.

The project "Biodiversity, ecosystems and agricultural policies" examines how to better attain synergies and minimise trade-offs across this nexus; and draws on experiences from a broad range of countries and will summarise implications in the context of the Sustainable Development Goals.

Read more on OECD work on sustainable agriculture including on biodiversity and ecosystems.

‌SUPPORT TO FISHERIES: LEVELS AND IMPACTS - MAY 2017 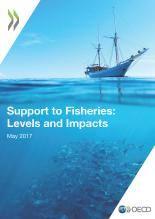 Various bodies, including the OECD, have been calling for more transparency and better understanding of the effects of fisheries support since the 1980s. These calls have been motivated by concerns that some forms of support may complicate sustainable fisheries resources management by promoting overcapacity and overfishing. Currently, negotiations are taking place at the WTO and countries are working to implement the UN Sustainable Development Goal 14.6, with the aim to eliminate all such harmful fisheries subsidies.

This report describes the latest OECD inventory of support policies in participating countries. These are defined as policies that generate a transfer from taxpayers to fishers. It also provides a review of the past literature on the nature and effects of support to the fisheries sector, including a preliminary analysis to identify the factors that determine how support can affect overcapacity and overfishing, including illegal fishing, along with their likely benefits.

The OECD Environmental Performance Review (EPR) chapters on biodiversity conservation and sustainable use assess how well the reviewed countries have done in achieving their biodiversity-related objectives, in terms of both environmental effectiveness and economic efficiency of policies and measures, and in mainstreaming biodiversity considerations into sectoral policies such as:

All EPRs provide recommendations for improving future policies and performance.

Since the inception of the third EPR cycle in 2010, 12 EPRs have included chapters focusing on biodiversity issues:

Read more on the OECD work on environmental country reviews.