Japan has high employment rates for men and older workers, and a low unemployment rate, but further efforts are needed to promote increases in female and older-worker employment rates so as to combat the trend decline in the working-age population, while also reducing labour market duality.

Financial imbalances in the unemployment insurance system encouraged a restrictive reform of benefit entitlements in 2001, and only about one unemployed person in four currently receives wage-related benefits. But recently liability to pay contributions has been extended to cover workers with relatively short-term contracts, who previously were exempt, and this will increase benefit coverage for non-regular workers. Most benefit periods are short, and when benefits end few people qualify for welfare payments, since only a person who has neither savings nor any expensive consumer goods can qualify and assistance may be refused on grounds of insufficient job search.

A number of  labour market features, however, help to make this system manageable. Limits on cash unemployment support encourage many workers to prefer “lifetime” employment relationships, where the risk of unemployment is low. When workers become unemployed, they are strongly motivated to resume work towards the end of their benefit period. A nationwide network of volunteers helps to identify situations of severe hardship in each neighbourhood. Single mothers in low-paid work qualify easily for a special allowance and most of them rely on this, rather than social assistance. Increased benefit coverage would put some of these features at risk, and rather than radical reform, the report recommends cautious easing of access to welfare with increased employment assistance for welfare recipients.

Expenditure on active labour market programmes as a percentage of GDP is comparatively low. Most expenditure is on various forms of placement assistance rather than large-scale hiring subsidies or training programmes. During the recent crisis, large supplementary budgets funded regional and local governments to set up job-creation programmes, an approach that was last used many years earlier: but emergency budgets are not always spent, and information about actual programme outcomes should be improved. 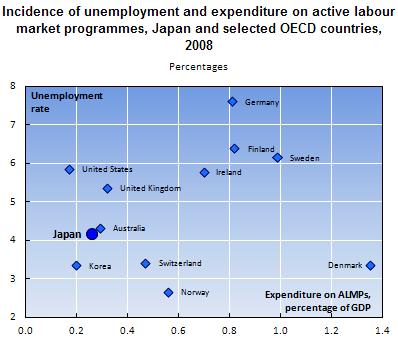 Non-regular work represents a third of total dependent employment in Japan, but this concept refers to a variety of employment situations involving different policy issues. Many non-regular workers are married women working part-time, for whom tax breaks and exemptions from social insurance contributions often act as a disincentive to working full time. Young adults unable to find regular work are now recognised as a target group for labour market programmes. The majority of firms are keeping their mandatory retirement age at 60, but they are obliged to create a system for continued employment through to the public pension age (soon to be 65 for men), typically offering to re-employ their older workers on fixed-term contracts at lower wages supplemented by company pension payments. But many older workers switch to a different occupation and work up to, and beyond, the age of 65.

The report "Activation Policies in Japan" is part of an OECD project on labour market policies and activation strategies for the unemployed and other employable benefit recipients. A total of seven country reports are planned; the reports on Ireland, Norway, Finland and Switzerland have already been published. Free electronic copies of all reports are available on www.oecd.org/els/workingpapers as Social, Employment and Migration Working Papers No. 113 (Japan), No. 112 (Switzerland), No. 98 (Finland), No. 78 (Norway) and No. 75 (Ireland).