OECD has released data on health spending by disease, age and gender - the first time that such consistent international estimates have been made available. These data are important because they can support policy makers in decisions about resource allocation. This policy brief presents the main findings using data from a group of 12 OECD countries over the period from 2003 to 2011. 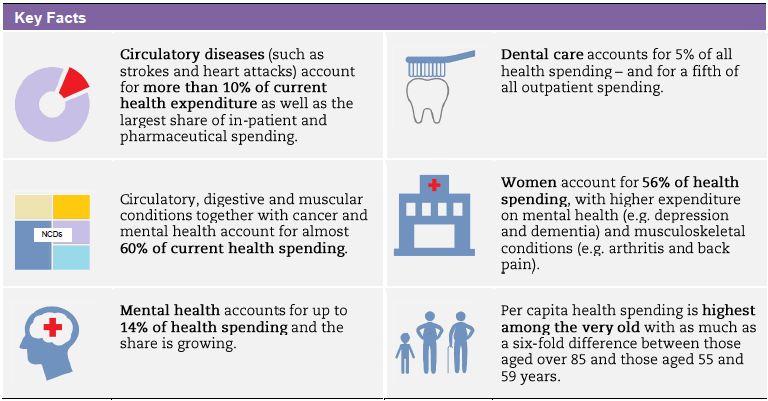 The overall objective is to accelerate the process of deriving consistent and comparable health expenditure data by disease categories. The aim of this project is expand the scope of available data by (i) increasing the number of countries for which similar data can be derived and (ii) expand the data collection beyond hospital expenditures to include the other major health care expenditure categories, i.e. outpatient (ambulatory) and pharmaceutical spending.

In 2008, the OECD completed a project entitled Estimating Expenditure by Disease, Age and Gender under the System of Health Accounts (SHA) Framework. Under the first phase, a set of guidelines was developed covering the main concepts and definitions and a methodology to allocate health expenditures (as defined under SHA) according to disease, age and gender. The second phase of the project consisted of a pilot study to test the feasibility of implementing these draft guidelines under differing health care system characteristics in six countries (Australia, Germany, Hungary, Korea, Slovenia and Sweden) with varying degrees of experience in undertaking such studies.

In a follow-up to the previous project, the OECD convened a meeting of experts in February 2012 with the goal of reviewing these guidelines, assessing developments since the project and making further recommendations. The final project report includes a revised set of guidelines.