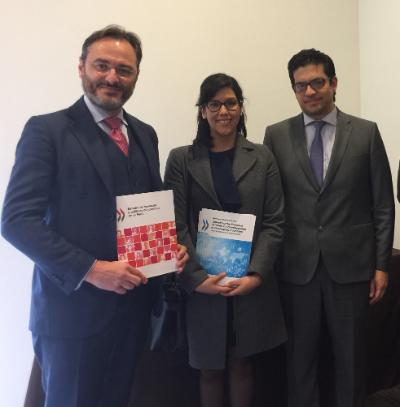 Lima, 3 August 2017 - With 26.9% of its population aged between 15 and 29, Peru has a demographic dividend to reap that can further boost its development. It is expected to last until the year 2038, after which the share of the dependent population will be larger than the working-age population. Adopting a National Youth Strategy would be a step forward to ensuring the well-being and active role of Peruvian youth in the economy and society, argues a new OECD Development Centre study titled "Youth Well-being Policy Review of Peru”.

“Since the beginning of the 21st century, Peru has experienced considerable socioeconomic progress. But young Peruvians are not fully reaping the benefits of this performance. 38.5% of young Peruvians still experience deprivation in different dimensions of well-being, such as employment, education, health, civic participation and social inclusion, simultaneously”, said Federico Bonaglia, Deputy Director of the OECD Development Centre while launching the report today in Lima. “An effective Youth Strategy would help enhance young Peruvian’s contribution to the country’s development”, he added.

The OECD Development Centre’s analysis builds on an original multidimensional approach: for the first time, the various dimensions of well-being are measured in an integrated way, instead of merely focusing on traditional poverty indicators or specific well-being dimensions.

According to the Youth Well-being Policy Review of Peru, there are large discrepancies within the youth Peruvian population: indigenous-speaking, rural and extremely poor youth are especially disadvantaged. Twice as many rural young people are suffering from multiple deprivations at the same time compared to their urban peers (68.3% vs. 31.4%). The same is true for indigenous-speaking youth, compared to their peers (65.6% vs. 35.3%). The gaps with respect to poverty levels are even more pronounced: almost all the extremely poor suffer multidimensional deprivation (85.4%).

The study nevertheless stresses that large investments in education have contributed to an impressive expansion of educational provision: in ten years, net enrolment in secondary schools (12 to 16-year-olds) increased by almost 12 percentage points, reaching 82.9% in 2014. However, Peruvian secondary education suffers from poor quality: students achieve low results in international (PISA, TERCE) and national (ECE) standardised tests for measuring learning and performance levels, with some of the lowest skills in the Latin America and Caribbean (LAC) region for reading comprehension, mathematics and science, well below the OECD average.

Moreover, the skills and learning gaps between different groups of young people are worrying. The data shows that students from higher-income families achieve skills levels comparable the OECD averages, but those from lower-income families barely achieve a basic skill level. There are also strong performance differences between schools: the performance gap between urban and rural schools is the highest in LAC and three times greater than the OECD gap. Peru has one of the highest informal employment rates in Latin America, with four in five young people working informally. Meanwhile, the skills/labour market needs mismatch rate is rising, with a quarter of youth being over-educated for their jobs (26.6%).

The report recommends stepping up investment in secondary education and improving the management of investment at the regional level, as well as upgrading school infrastructure, improving teachers’ working conditions, and supporting the cognitive and socio-emotional development of students by bringing social workers into schools. Enhancing the quality of education would contribute to improving all the dimensions of well-being.

The Youth Well-being Policy Review of Peru study reveals that the participation of young people to social and political spheres of public life remains low. In addition, trust in institutions seems to have deteriorated over the last ten years: for instance, 80% of young people do not trust the Congress. Restoring trust through better communications, official and institutionalised consultation between public authorities and the civil society is primordial to ensure that young people feel involved and effectively participate in the formulation of public policies.

Young Peruvians need to be at the heart of the political agenda to become an important pillar of national development. Progress has been made in recent years. Further cross-sectoral and intergovernmental efforts, increased investment in youth programs and a greater role and autonomy of the body responsible for youth can contribute to unlocking the potential of improving the well-being of young people in Peru.

For more information or to obtain a copy of the report, journalists are invited to contact Bochra Kriout (+33 (0)1 45 24 82 96) at the OECD Development Centre’s Press Office.

Youth Well-being Policy Review of Peru is part of the OECD Development Centre’s Youth Inclusion Project that co-financed by the European Union. Click here to find more about the report

On the occasion of the International Youth Day 2017, the European Union and the OECD Development Centre will launch a photo contest for youth. Young people aged 18-30 will be invited to share their views and aspirations regarding the future of work through a powerful photo. For details please visit: bit.ly/2wl7EcL.