20/09/2019 - Taxing polluting sources of energy is an effective way to curb emissions that harm the planet and human health, and the income generated can be used to ease the low-carbon transition for vulnerable households. Yet 70% of energy-related CO2 emissions from advanced and emerging economies are entirely untaxed, offering little incentive to move to cleaner energy, according to a new OECD report.

As world leaders gather for a UN Summit on climate change amid mounting public pressure for action, a preview of Taxing Energy Use 2019 shows that for 44 countries accounting for over 80% of energy emissions, taxes on polluting sources of energy are not set anywhere near the levels needed to reduce the risks and impacts of climate change and air pollution.

Taxes on road fuel are relatively high yet rarely fully reflect the cost of environmental harm, especially with some road transport sectors offered preferential rates. Taxes on coal – which is behind almost half of CO2 emissions from energy – are zero or close to zero in most countries. Taxes are often higher on natural gas, which is cleaner. For international flights and shipping, fuel taxes are zero, meaning long-haul frequent flyers and cargo shipping firms are not paying their fair share.

“We know we need to burn less fossil fuel, but when taxes on the most polluting fuels are zero or close to zero, there is little incentive to change,” said OECD Secretary-General Angel Gurría. “Energy taxes are not the sole solution, but we can’t curb climate change without them. They should be applied fairly and used to improve well-being and ease the energy transition for vulnerable groups.” 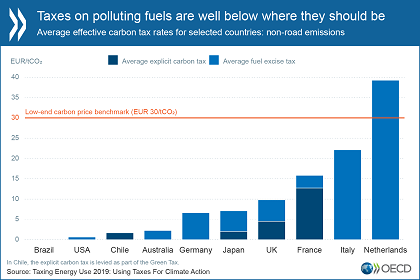 Across the 44 countries studied, 97% of energy-related CO2 emissions outside of road transport are taxed far below levels that would reflect damage to the environment. Only four countries (Denmark, the Netherlands, Norway and Switzerland) tax non-road energy above EUR 30/t CO2, considered a low-end estimate of the costs to the climate of carbon emissions. Several countries have even lowered energy taxes in recent years.

Adjusting taxes, along with state subsidies and investment, is vital to encourage a shift to low-carbon energy, transport, industry and agriculture. Given the difficulties of making big changes without hurting industries or communities, a new strand of OECD work shows how factoring in potential synergies and trade-offs between emission reduction goals and broader societal objectives such as better health, jobs and affordability of services can increase the incentives for swift action to cut emissions.

New OECD analysis that will be presented at next week’s UN Summit, Accelerating Climate Action: Refocusing Policies through a Well-Being Lens, says focusing on goals like clean air, healthy eating, accessibility of services and employment and inclusive fiscal reform could make it easier to introduce changes that will end up accelerating the low-carbon transition while improving lives.

Mr Gurría urged governments in July to face up to growing anger, particularly among young people, at backsliding in some countries on decarbonising economies even as emissions from energy are at an all-time high. While energy taxes stagnate, The 2019 OECD Inventory of support for fossil fuels finds that government support for fossil fuel production and use in the 44 countries studied (OECD and G20 plus Colombia) was USD 140 billion in 2017, with subsidies rising in some countries.

Taxing Energy Use 2019 says improving tax policy so it gives a fair chance to low-carbon technologies would help shift investment to greener options.

The report – which looks at three types of tax on energy (excise taxes on fuels, carbon taxes and taxes on electricity use) in areas like power and heat generation, industry and transport – says governments should ensure any tax rises resulting from tax reforms do not hurt vulnerable  households, firms or workers. Extra tax revenues can be used for social purposes such as lowering income taxes, increasing spending on infrastructure or health, or funding direct transfers to households.

Read a Summary of Key Findings

(The full report with country profiles will be available in October.)

For further information, journalists should contact Catherine Bremer in the OECD Media Office (+33 1 45 24 97 00).