Conference on Gender Equality in Government and Business, 4 May 2010, Paris, France 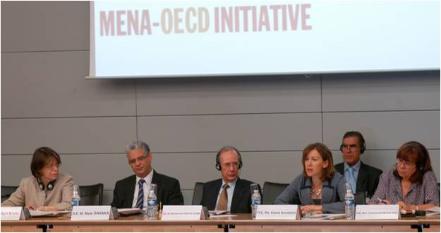 Gender equality is a key pillar of economic growth and modernisation in the MENA region, as underlined in the opening remarks of H.E. Mr. Mohammed Sâad El Alami and H.E. Mr. Nizar Baraka, the Moroccan Ministers of Public Sector Modernisation and of Economic and General Affairs. Improving women's access to education and to the labour market is key to building a larger middle class and increasing standards of living in the region.

The role of gender equality as a key driver for innovation and competitiveness on the global marketplace has increasingly become a subject of debate by policy-makers and private sector representatives. Despite significant improvements in educational equality in both MENA and OECD countries, gender gaps persist in employment rates, remuneration, and participation in ownership. In addition, women’s representation in decision-making bodies—political bodies, corporate boards, and management-level positions—remains low. Women also continue to face obstacles in accessing government services and business support services. Addressing these challenges in a targeted manner is key to capitalising on public investments in education, and to maximising women’s contribution to long term economic development.

The MENA-OECD Conference on Gender Equality in Government and Business, organised jointly by the Governance and Investment Pillars of the MENA-OECD Initiative, provided an excellent opportunity to discuss strategies for strengthening gender equality in both private and public sector employment. Key themes addressed included attracting talent to the public and private sectors, the pros and cons of quotas, and improving women’s access to government and business services. The Conference brought together participants from 19 OECD countries, 14 MENA countries, and several regional and international organisations.

Session 2: The Pros and Cons of Quotas