30/04/20 – Labour taxes on the average worker across OECD countries continued to decline for the sixth consecutive year in 2019, according to a new OECD report.

Taxing Wages 2020 shows that the “tax wedge” – total taxes on labour costs paid by employees and employers, minus family benefits, as a percentage of the labour cost to the employer – was 36.0% in 2019. This OECD-wide average rate, calculated for a single person with no children earning the average wage,  represents a fall of 0.11 percentage points from 2018.

The indicators presented in Taxing Wages 2020 provide an important baseline on labour taxation in 2019, against which the impact of the COVID-19 pandemic can be measured. In responding to the COVID-19 pandemic, many countries have introduced a range of concessions that will contribute to a further decrease in labour taxes in many countries. Indicators for 2020, which will include the impact of the pandemic on wages and the different elements of labour taxation including income taxes, social security contributions, payroll taxes and cash benefits, will be available in the 2021 edition of the report. These indicators will inform future policy discussions on the role that labour taxes should play in the overall tax mix, both in recovery and beyond. 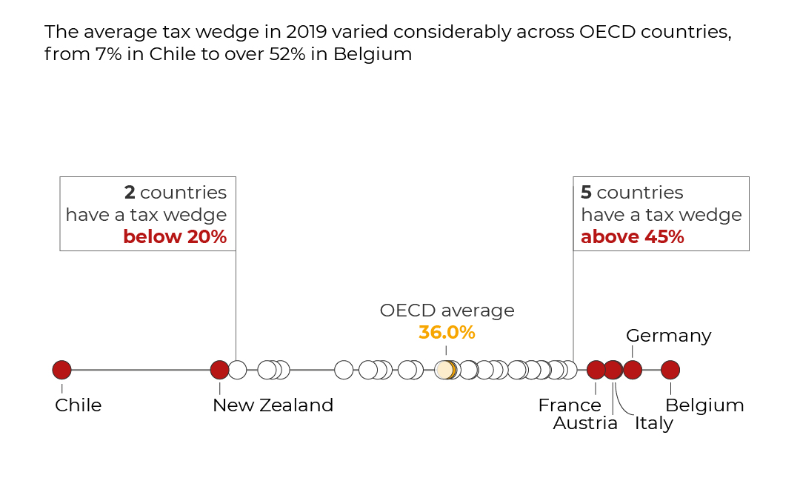 Taxing Wages 2020 also considers the net personal average tax rate (NPATR), which measures the income tax and SSCs paid by employees, minus any family benefits received, as a share of gross wages. In 2019, the OECD average rate was 25.9% for a single person with no children earning the average wage. This rate is 0.4 percentage points higher than in 2018.  The NPATR  for the average worker varies considerably among countries: ranging from below 15% in Mexico and Chile to over 35% in Denmark, Lithuania, Belgium and Germany.

Tax wedges for single people and families with children

To access the report, country notes, and summaries, visit: http://oe.cd/TaxingWages.

Media enquiries should be directed to David Bradbury, Head of the OECD’s Tax Policy and Statistics division (+33 (0) 1 45 24 15 97) or CTP.Communications@oecd.org.

An embeddable data visualisation for this publication is available at: www.compareyourcountry.org/taxing-wages. Please use the ‘+share/embed’ button to customize this tool for your country and language and to generate the embed code for your website.